A basic income is a fixed amount paid to each citizen each month by the government, no matter what their means. (Of course, what this really means is that it’s paid by other citizens, as the government has no resources of its own, but let’s skip that for now.) On its face, it sounds like an horrendously socialist idea, and if it’s tacked on top of other programs or set at too high a level, it would be just that.

But implemented properly, it could form the basis of a market-based solution to poverty and inequality. Compared to the current system of multiple, means-tested benefits allocated on the basis of family structure, medical conditions or recent unemployment, basic income has many advantages.

First, the current system creates poverty traps, where a huge marginal rate of taxation is applied to additional income. A single mother in the USA is better off taking a job paying $29,000 than one paying $68,000: All her extra income from the better job gets eaten-up by the benefits she would lose. Worse, if you plot her total income against her earned income, you see numerous “welfare cliffs” where earning one more dollar would cost several thousand dollars in benefits. Assuming that a basic income replaces all other benefits, it neatly avoids this problem. Every dollar earned adds to a citizen’s income, and the marginal rate of taxation never exceeds unity. 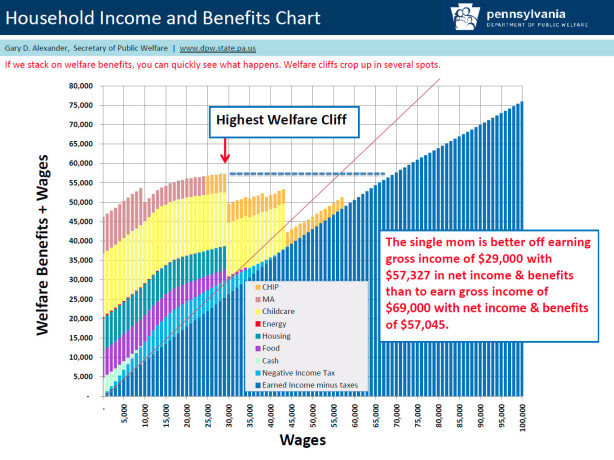 Second, the current system is, just like the tax system, a magnet for politicians who want to serve their own special interest groups. The benefits system has become horrendously complex, again just like the tax system, with regulations piled on top of regulations as each government attempts to fine-tune the system to its ends. There are exclusions and inclusions. Caps and claw-backs. Qualifications and specials cases. A basic income system needs no such tuning, assuming again it replaces all other benefits. It therefore provides no opportunities for graft and rent seeking.

Third, a basic income system, especially when paired with a flat tax, is incredibly simple to implement. The IRS could be reduced to a fraction of its size, and benefits offices could be closed. The government would shed a huge number of workers, increasing economic efficiency and shifting resources away from the value-destroying section of our economy and towards the value-creating section. Government workers may shudder at this thought, but if they chose not to work in the private sector, where, as Dr. Stantz famously reminded us, they expect results, they would at least have the basic income to fall back upon.

Finally, a basic income system dovetails perfectly with the privatization of many government services. School choice could be opened up simply by allocating a basic income to each child and allowing that to be spent on the school of choice. Healthcare could be made accessible by allowing the market to provide solutions that the basic income can purchase. The result is a more vibrant, market-driven economy, free from the dead hand of central control, while still providing a safety net for those in need.

One problem that I alluded to above is that if a basic income is set too high, it removes any incentive to work. It is not, as some on the left see it, a solution to the post-work world where all the jobs have disappeared as a result of automation, and where we can all spend our days at leisure while the government provides for our every need. Rather, it is a way to create a limited welfare state that is not subject to the failings and potential for mischief of the current system.

The other problem, of course, is that it would work so well. Politicians needs rent seekers. They need supplicants, looking for largess from the public purse in return for their votes. And certainly in the case of the one party that is funded so generously by public sector unions, they need government employees, paid to shuffle around resources that could be better spent elsewhere. Simplify the tax code, simplify the benefits system, and politicians suddenly lose the tools that they use to dispense their favors. So forget it. It’s not going to happen.

Still, it’s one heck of a great idea.

One thought on “Basic Income”

View all posts by mikegranby